European Maker Week: a celebration of makers and innovators across Europe

17.03.2016
The European Maker Week is an initiative promoted by the European Commission and implemented by Maker Faire Rome in collaboration with Startup Europe, aim to draw European citizens to the "Maker world" and the FabLab, Makerspaces, Hackersapce and the Hardware Startups Environment.
Taking place from 30 May until 5 June 2016 all over Europe, the purposes of the event are twofold: to raise awareness about the importance of the maker culture to foster an education of creativity and innovation in all schools across Europe; and to build bridges between local authorities and media and the main players of their own local makers' ecosystems.
Call for schools
The European Maker Week aims to reach new players such as schools who never organised a maker event before. If you are still in school and you have an innovative project that you'd like to show to the public at Maker Faire Rome 2016, the Call for Schools is now open and is waiting for your proposal!
Maker Faire Rome offers great visibility, plenty of contacts and tons of fun. All participating projects will be displayed on the Event web site, and Maker Faire Rome press & media team will introduce them to national and international newspapers, radio and television.
The Call for Schools is open to educational institutions belonging to the countries of the European Union (Level 3 /14-18 years of age). The deadline for submitting proposals is May 20, 2016. A jury will pick 55 of the most innovative projects which will be hosted during Maker Faire Rome 2016 inside an area dedicated entirely to schools.
What is the "Maker Movement"?
The "Maker Movement" is the name given to the increasing number of people coming from different backgrounds, who are employing do-it-yourself (DIY) and do-it-with-other (DIWO) techniques and processes to develop unique technologies and products as well innovative solutions.
In Europe, the Maker culture has significantly spread over the continent in the last few years due to the increasing number of innovative projects and workshops made by people who build their own vision of the future through resourcefulness and creativity. Europe has the highest number of FabLabs and Makerspaces and was the birthplace of revolutionary projects like Arduino, Rapberry Pi, MICROBIT and RepRap. Every year there are more than 50 Maker Faires and Mini Maker Faires: Maker Faire Rome – which is the largest one – has exceeded 100 thousand participants during its third edition in 2015. Across Europe, the business world is investing in makers, craftsmen are renewing thanks to digital fabrication and schools are opening their own makerspace. 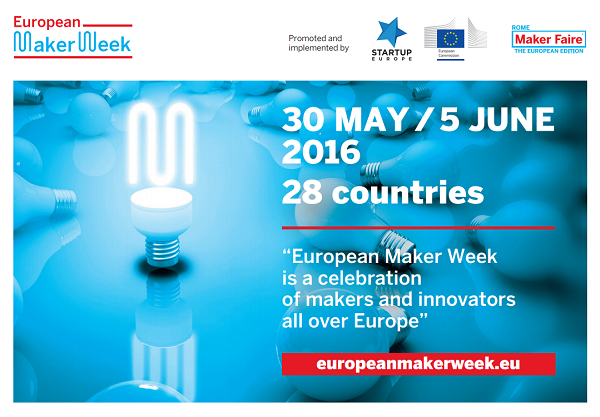